The CO2 reduction costs associated with supported renewable electricity shown in the chart below have been calculated by dividing the subsidy per kWh (in the interest of simplicity, the feed-in tariff less an average market price of 5.345 cent/kWh) by the average emissions from a modern combined cycle plant that are avoided (0.44 t CO2/MWh or 0.44 kg CO2/kWh).

On the basis of the average feed-in tariffs in 2011 and the above figures, the CO2 avoidance costs shown below arise. The figure includes balancing energy cost for wind power and additional raw material payments of 2 Cent/kWh granted for biogas and biomass in 2008. 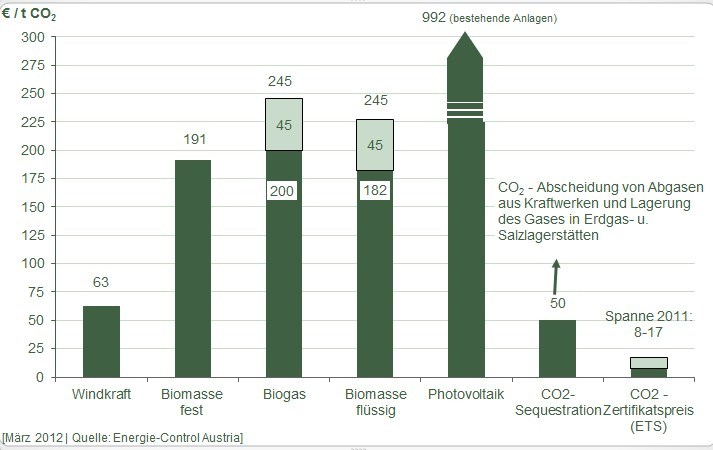 close
The chart reveals that with the exception of hydropower, renewable power generation is an expensive option compared with other CO2 reduction measures.

The EU Emission Trading Scheme is a cornerstone of the European climate strategy. Every member state is obliged to draw up a plan for the allocation of emission allowances to large industrial and power sector installations. The first trading period expired in 2007, and the second period lasted until 2012. The Second National Allocation Plan (NAP) covered the 2008–2012 period. Austria's Second National Allocation Plan (NAP 2) provided for an annual reduction of around 5.3 million tonnes of CO2 emissions from the 200 or so energy and industrial companies covered, as compared with the projected "business as usual" trend for 2008–2012 (source: Austrian Ministry of Agriculture, Forestry, Environment and Water Management).

The Emissionszertifikategesetz (Emission Allowance Trading Act) 2011 contains rules for the functioning of the Austrian emission trading system from 2013 onwards.
It basically provides that the regulations that were in place for the second trading period between 2008 and 2012 continue to apply, with a couple of small technical adjustments. There are separate rules that govern the allocation of emission allowances for the trading period from 2013. Also, the period that started in 2013 lasts eight years (not four, as before). (Source: Ministry of Agriculture, Forestry, Environment and Water Management)

Further information is available from the following sites:

Website of the Austrian federal agency for environmental protection and control
www.umweltbundesamt.at/en/