All about invoices for gas and electriciy.

Info about the net, meters and your supply

Our experts will be happy to help you.

Since 2001, electricity suppliers in Austria have had the obligation to show what primary energy source they use and how much CO2 emissions and radioactive waste is produced when they generate electricity. This information must be provided on bills and promotional material subject to labelling obligations. On our German pages, a folder on labelling provides further information.

E-Control is entrusted with monitoring electricity labelling. On an annual basis, we conduct a comprehensive review of all suppliers supplying electricity to consumers in Austria. The results of this evaluation as well as a presentation of the current framework are presented in our annual labelling report, available from our German pages.

The Austrian labelling model is an evidence-based system. Electricity traders and suppliers have to present evidence for their primary energy mix in line with the statutory provisions. If they cannot present evidence for a certain amount of electricity, this amount has to be classified as "electricity of unknown origin - ENTSO-E mix", a statistical value.

Example of electricity disclosure on an annual bill of a customer

Example of electricity disclosure on an annual bill of a customer 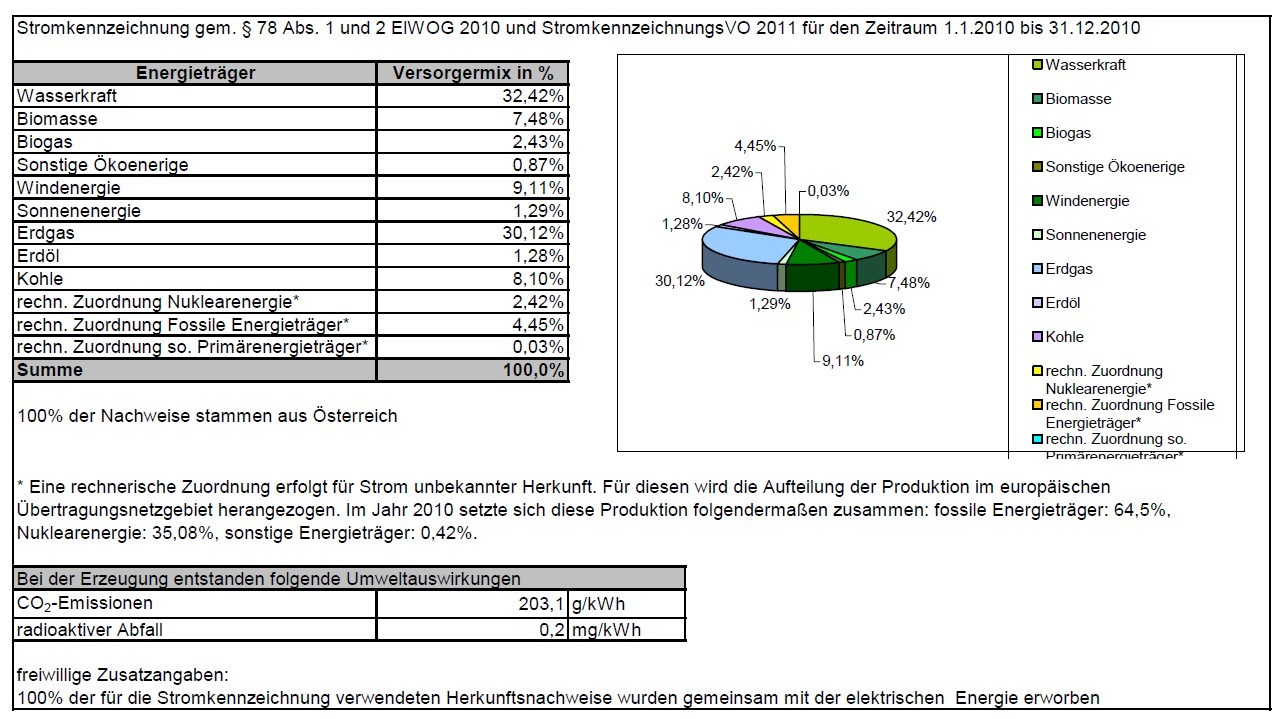 Electricity labelling is managed mainly via the Austrian guarantees of origin database (GO database), which covers the entire life cycle of a guarantee of origin (GO): issuing - transfer - redeeming. By choosing this evidence-based approach and the management via a central Austrian database, Austria has installed an extremely transparent and reliable system which virtually excludes fraud such as double issue or double redeeming. Electricity disclosure on the annual bill of consumers should contain the information provided in the figure above (with random numbers).

On average, Austrian consumers were supplied with an electricity mix of 89.10% from known renewable energy sources, 10.36% from known fossil fuels, 0.26% from other known energy sources and 0.27% of unknown origin in 2014. These are approximate numbers that resulted from a check on the labelling information for that year. 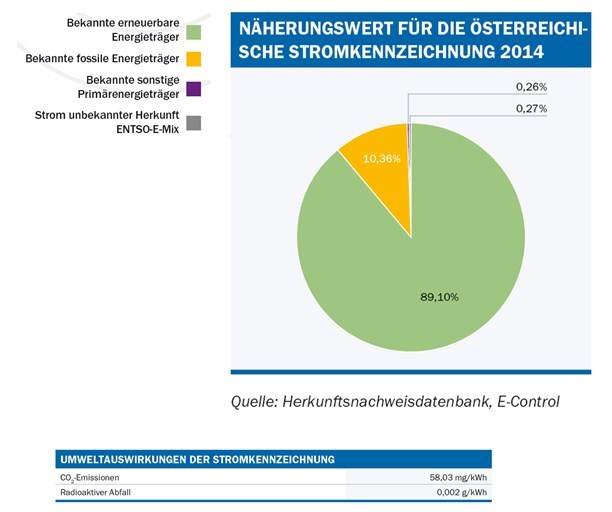 The Elektrizitätswirtschafts- und -organisationgesetz (Electricity Act) 2010, and more specifically section 78(2) of that Act, requires that bills and marketing materials must make explicit how the environment was affected, at least in terms of CO2 emissions and radioactive waste. Section 5(1) of the Stromkennzeichnungsverordnung (Power Labelling Ordinance) 2011 specifies further that CO2 emissions must be stated in g/kWh and radioactive waste in mg/kWh.

The environmental impact depends on the energy sources and generation technologies used. Renewable sources for instance store just as much CO2 during their growth as is released when they are used for energy generation, so they are considered carbon neutral (i.e. with an emission value of 0 g/kWh of electricity). The higher the efficiency of the generation process (energy output relative to energy inputs) and the lower the ratio of carbon to hydrogen contained in the energy source, the lower emissions from fossil fuels (natural gas, oil and coal) will be. An efficient power plant thus causes less emissions than an inefficient one.

The estimated environmental impacts of the various energy sources are shown in the table below.

If the origin of electricity cannot be unequivocally determined, e.g. as can be the case when electricity is bought at a power exchange, electricity of unknown origin must be labelled as "ENTSO-E mix". The ENTSO-E mix is a statistical proxy for the Europe-wide power mix. On the homepage of the GO database, the current energy mix is available along with the corresponding emission values.

Check the conversion from m3 to kWh on you gas bill